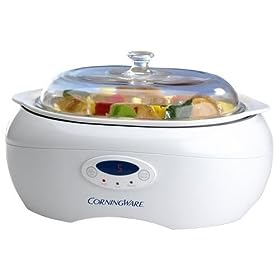 I love my slow cooker!

I can prep early in the day, clean up the kitchen and just go about my normal routine knowing that come evening I’ll have something hearty and HOT to fill myself (and my parents) with. However slow cooking is not as instinctive as I would have thought. There are quite a few little mistakes that I’ve made along the way and there are still some dishes I’m trying to make more flavorful, less watery etc. To that end I figured I would, from time to time, share soe of my accumulated Slow Cooking tips in a kind of ongoing series. If you have any tips that you’d like to share simply leave them in the comments, I”ll share them in the next installment (properly credited of course!) 😀

1. When purchasing a crockpot, look for one with a removable liner (like mine!). They are much easier to clean. If you have a nonremovable liner, however, all is not lost! Line your crockpot with a cooking bag and you’ll have no cleanup at all. Spray the inside of the liner with cooking spray before you fill it to make cleanup easier.

2. Never heat a crockery cooker, crockery liner or stoneware pot on an electric or gas range top surface burner. (Never place under a broiler either.)

3. Some crockpots have heat coils on the bottom. If your model does, it is best to place some of the vegetables at the bottom of the crockpot and then place the meat on top. The vegetables act as a grid and keep the meat from sticking after many hours of contact with the heated surface.

4. Read the use and care booklet to find out the temperatures for the different settings on your cooker. To cook foods safely, the heat control setting must be at least 180 F. If your cooker has a warming setting (140F-160F) for heating cooked foods, NEVER use this setting for cooking!

5. If asked to add wine/alcohol to a crockpot recipe use the ‘good’ stuff. This is even more important than in conventional cooking because the liquids in a crockpot don’t have a chance to evaporate (so no flavour concentration of your sauces occurs).

6. Similarly, because the liquids in a crockpot don’t boil away, if you are preparing a conventional recipe in your slow cooker use 30% – 50% less liquid than the recipe called for (unless you are cooking rice or making a soup).

7. Living on a mountain? When cooking at high altitude, be sure to allow an additional 30 minutes for each hour of cooking time specified in the recipe. Legumes typically take twice as long to cook at high altitude as at sea level.

8. Did you know that vegetables can take longer to cook in a crockpot than meat? For that reason cut them in 1/2 inch pieces before putting them in.

9. Leave your pot alone! The main advantage of slow cooking is that once you put that lid back on you can just walk away. You do not need to tend the pot.

10. Was your meal prepared in a crockery slow cooker? If so you don’t want to store the crockery liner in the
refrigerator. The change in temperature can be harmful to the finish. Dish the food into a refrigerator-safe container and store it that way instead. 🙂 No Veal on hand? Use Chicken!

How To Choose The Perfect Bread Maker
Author: Sarina
Chocolate: Love at First Bite – or Sight
No Veal on hand? Use Chicken!